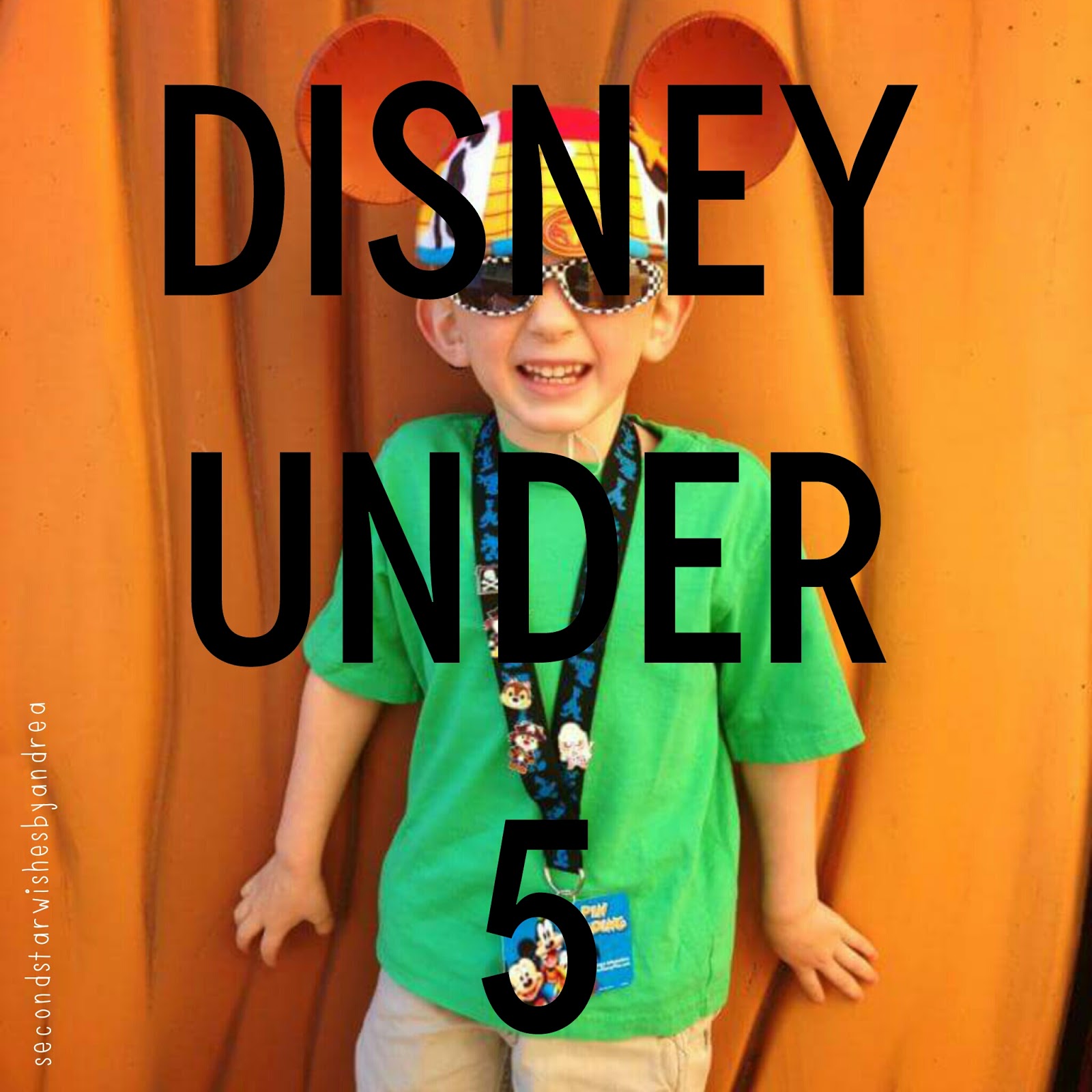 Part 3: In Park Tips & Tricks
So, you’ve made it!  You got all the planning done, you survived the car or airplane ride and you’re here…you’re really here.
Now, where in the world do you start?
In part 3 of this 3 part series I’m going to answer just that.  What do you need to know once you are actually in the parks?  What rides can a kid under 5 ride?  What things are geared just for them?

General Tips and Tricks
I recommend working in some sort of down time during your stay.  With a base theme park ticket you can enter the same park as many times as you wish in the same day.  This helps for runs back to the resort for a nap!
At Disney World-Value resorts are only accessible by Disney buses.  Some Moderate and Deluxe resorts will have ferry and monorail service to and from the parks.  These extra options can help lessen the wait time for getting back to the resort.  HERE is a great guide for getting around Disney.

It is a good idea to buy Disney souvenirs before you leave home!  Things can cost more in the parks vs back home.  Check Walmart, Target, Party City, and even Dollar Tree for Disney goodies.  Dollar Tree also sells glow sticks and other glow toys that can come in handy for night time shows and parades!


Schedule character dinings before you travel.  Kids can get cranky, hot, and tired waiting in lines to meet those famous faces.  At a character dining you can sit, eat, and relax while your Disney friends come to you!

Rider switch…use it!  If mom and dad both want to ride something but little Susie is too small, no worries!  Tell the cast member at the entrance you want to use a rider swap.  What this means is that one adult will go in to the ride while the other hangs back with little Susie.  When that parent finishes the ride, little Susie is handed over, and the other parent gets to go in to the ride (usually through the FastPass line).This way mom and dad can both experience their favorites without both standing in the long lines!

All Walt Disney resorts offer in-room childcare through Kids Nite Out for a fee.

Some WDW resort off Children’s Activity Centers for guests aged 3-12 for a fee.  Reservation are recommended.  These are:


In Disneyland Park childcare is available for a fee at Pinocchio’s Workshop inside the Grand Floridian Resort.  Reservations are recommended.
Don’t forget the Baby Care Centers.  You can read about them in THIS post.
If you plan to bring a stroller (which I highly recommend) some type of sun cover and clip on fan will work wonders!
Speaking of strollers…bring a trash bag or poncho in case it rains!  Disney has stroller park (picture a sea of perfectly lined strollers) for you to leave your stroller while you are on a ride.  If it rains you want to be prepared!  Another tip is to have something clipped or tied to your stroller for easy identification!  You’d never know how many families have one that looks JUST like your’s. 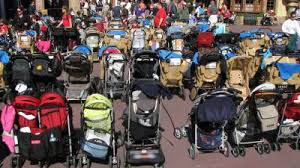 Get Mickey ears!  You can’t go to Disney and not get these.  They are like a right of passage.

Fantasyland will be your best friend!  This is where most of the little kid friendly rides are.  If you’re at Disneyland Park be sure to check out Toon Town.
Kingdom Strollers in Orlando has strollers and cribs for rent during your vacation stay.  This can be a super helpful service if you’re flying.
So What Can They Actually Ride at Disney World?
Magic Kingdom:
Be sure to get to the park at least 30 minutes before it opens for a special opening show!
Seven Dwarfs Mine Train (38″ height requirement)
Under the Sea – Journey of the Little Mermaid
Adventures of Winnie the Pooh
It’s a Small World
Haunted Mansion
Pirates of the Caribbean
Jungle Cruise
Peter Pan (FastPass+ is recommended)
Enchanted Tales with Belle (FastPass+ is recommended)
Buzz Lightyear’s Space Ranger Spin (FastPass+ is recommended)
Dumbo
Barnstormer
Monsters Inc. Laugh Floor
PhilharMagic
Carousel of Progress (this one is great to sit back, relax, and let the kids unwind)
Mad Tea Party
Tomorrowland Transit Authority (this one is great to sit back, relax, and let the kids unwind)
There is a great play area at the exit of Splash Mountain while you’re waiting for someone on the ride.

Visit Character Spot if interested in characters
The Seas with Nemo and Friends
Explore The Seas pavilion
Turtle Talk With Crush (FastPass+ can be used)
Living with the Land
Journey Into Imagination with Figment
Taste sodas from around the world at Club Cool
Explore Innoventions East and West
Gran Fiesta Tour
Spaceship Earth (FastPass+ can be used)
Ellen’s Universe of Energy (takes 45 minutes-this one is great to sit back, relax, and let the kids unwind)
Explore the World Showcase
Illuminations (night show)


So What Can They Ride At Disneyland?
Disneyland Park (Detailed information from HERE):
These attractions stand still and you and the kids either walk through or sit and watch. If your little ones need to work off some energy, Toontown is an especially good place for that, with most of the walk-through houses and lots of fun things outside on the streets.
These rides allow children, but for various reasons may not be right for your little one. For each one, we tell you why.
California Adventure:
Visit Cars Land as soon as the park opens! Mater’s Junkyard Jamboree
Visit Bug Land: Flik’s Flyers, Francis’ Ladybug Boogie, Heimlich’s Chew Chew Train, It’s Tough to be a Bug!, Princess Dot Puddle ParkTuck and Roll’s Drive’Em Buggies
Disney’s Aladdin: A Musical Spectacular
Muppet*Vision 3D
Watch the Pixar Play Parade
Catch Disney Jr. Live on Stage
The Little Mermaid-Ariel’s Undersea Adventure
Monsters, Inc.—Mike & Sully to the Rescue
Toy Story Midway Mania!
Red Car Trolley
Redwood Creek Challenge Trail and Wilderness Explorer Camp
Golden Zephyr
Jumpin’ Jellyfish
King Triton’s Carousel of the Sea
Silly Symphony Swings (40 inch height requirement)
Toy Story Midway Mania!
Color of Wonder Nighttime Show
…and there you have it!  The top things you need to know while in the parks with kids under 5.  See!  There is plenty they can do so don’t be intimated and think you won’t have fun.  Disney is magical at any age and at every stage in life.
Do you have any other tips, tricks, or secrets I missed?  We’d all love to read them!  Tell us your experience in the comments.
Did you miss Part 1 on preplanning tips for kids under 5?  Click HERE to check it out!

Or, Part 2 on packing and travel tips for kids under 5?  Click HERE to check it out!
Are you a beginner to Disney World?  Be sure to check out THIS post on the top things to know when planning a Disney World vacation.

Andrea lives in Ponte Vedra, Florida and is the owner of Second Star Wishes. She has been a Travel Specialist since 2015.